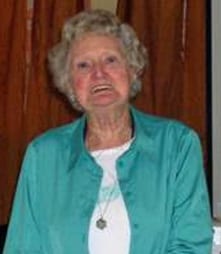 Lorraine Pole who died on at the wonderful age of 102 was an important part of Melbourne High School.

I personally remember and her husband Bill from my schooldays at the school from 1952. In the 1950s it was the beginnings of an active parent group. There were seemingly endless events many to raise funds for a pool. There was also a gigantic fair. At all these events the leaders were the Poles. No one worked harder. This was no short term commitment. Lorraine was to also serve on the School Council and Bill was active with the Old Boys. Bill (William John) Pole (1917-2000 )at the school from 1930-1934 was an active member of the Old Boys Association for many years was President 1971 to 1979, and was made an Honorary Life Member, he was also active in the Football club serving as President. Lorraine was also Wardrobe Mistress for many schools plays and musicals. After Bill’s death Lorraine kept working for the school and after this amazing service she was honoured by being a Patron of the School. She was active in this role taking a keen and supportive interest in all school events.

In the late 1950s and through the 1960s and 1970s Lorraine worked tirelessly producing costumes and staging for the School Musical. Brian Corless and David Niven were the producers and Lorraine, together with other mothers, always responded to their calls for help in producing costumes for the MHS boys and the Mac Rob girls. Bruce Worland was musical director at this time and speaks glowingly of Lorraine’s efforts. Lorraine also gave countless hours to volunteering in the School Canteen over more than 40 years.

When she turned 100 the Principal Jeremy Ludowyke presented her with the School Medal, which had only been awarded to one other person. Her son Laurie (MHS 1956-1959) was also active both with the OBA, the GM and B and supporting school events.

Lorraine was always a hard worker, a direct speaker who always wanted to get on with the job. Over 60 years, Principals, the Old Boys and the boys of the school could always rely on Lorraine. Her contribution was enormous.